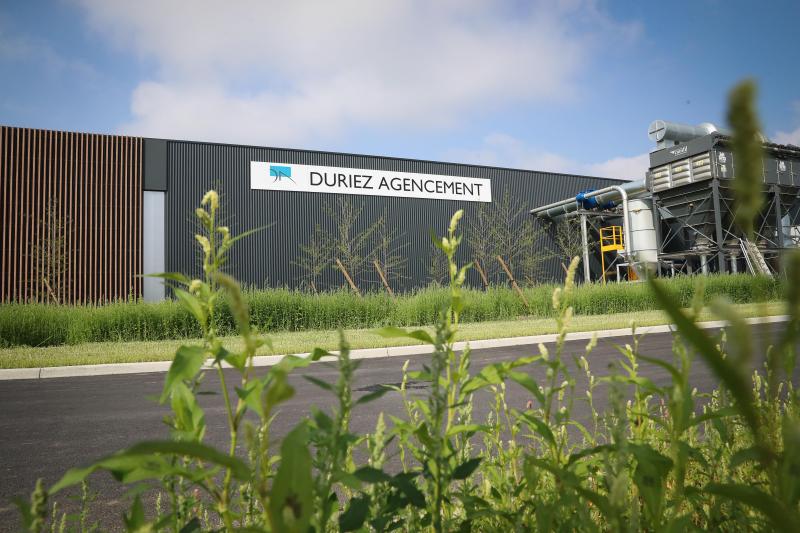 DURIEZ AGENCEMENT specializes in the design, manufacture and installation of high-end custom-made fittings. It is a family business that has existed for over 60 years and is a major player in its sector in France and Europe. It employs nearly 100 people, has 12,000 square meters of workshop space, and has a turnover of approximately 16 million euros (key figures for 2022).

In May 2021, the company moved its site to Templeuve-en-Pévèle, a French commune located in the Nord department in the Hauts-de-France region. This move was motivated by the desire to strengthen the sustainability of the company's activity and to reduce its carbon impact.

A carbon footprint assessment was carried out before and after the move, showing a 23% reduction in GHG emissions.

Duriez agencement company took advantage of the move of its production workshops to a new site to reduce its GHG emissions while optimizing its sustainability.

First, it installed more than 1,400 m2 of photovoltaic panels (280 kW of power) coupled with storage batteries to cover about 25% of the site's electricity needs. The company has also invested in a biomass boiler that makes use of the 400 tons of wood waste produced annually by the company.

It recovers waste heat from its air compressors to heat its delivery area and uses 'cool roof' technology (a roofing system capable of reflecting solar heat and keeping roof surfaces cool under the sun) for its roof to mechanically cool its building in the summer.

In addition, 75% of the surface of the new land occupied by the company has not been artificially landscaped in order to be used for other activities such as:

In total, thanks to these actions, Duriez has reduced the GHG emissions linked to its energy consumption by 80%. The company is still looking for new solutions to decarbonize its production process.